Background: At the last glacial maximum, Fennoscandia was covered by an ice sheet while the tundra occupied most of the rest of northern Eurasia. More or less disjunct refugial populations of plants were dispersed in southern Europe, often trapped between mountain ranges and seas. Genetic and paleobotanical evidences indicate that these populations have contributed much to Holocene recolonization of more northern latitudes. Less supportive evidence has been found for the existence of glacial populations located closer to the ice margin. Scots pine (Pinus sylvestris L.) is a nordic conifer with a wide natural range covering much of Eurasia. Fractures in its extant genetic structure might be indicative of glacial vicariance and how different refugia contributed to the current distribution at the continental level. The population structure of Scots pine was investigated on much of its Eurasian natural range using maternally inherited mitochondrial DNA polymorphisms. Results: A novel polymorphic region of the Scots pine mitochondrial genome has been identified, the intron 1 of nad7, with three variants caused by insertions-deletions. From 986 trees distributed among 54 populations, four distinct multi-locus mitochondrial haplotypes (mitotypes) were detected based on the three nad7 intron 1 haplotypes and two previously reported size variants for nad1 intron B/C. Population differentiation was high (GST = 0.657) and the distribution of the mitotypes was geographically highly structured, suggesting at least four genetically distinct ancestral lineages. A cosmopolitan lineage was widely distributed in much of Europe throughout eastern Asia. A previously reported lineage limited to the Iberian Peninsula was confirmed. A new geographically restricted lineage was found confined to Asia Minor. A new lineage was restricted to more northern latitudes in northeastern Europe and the Baltic region. Conclusion: The contribution of the various ancestral lineages to the current distribution of Scots pine was asymmetric and extant endemism reflected the presence of large geographic barriers to migration. The results suggest a complex biogeographical history with glacial refugia shared with temperate plant species in southern European Peninsulas and Asia Minor, and a genetically distinct glacial population located more North. These results confirm recent observations for cold tolerant species about the possible existence of refugial populations at mid-northern latitudes contributing significantly to the recolonization of northern Europe. Thus, Eurasian populations of nordic plant species might not be as genetically homogenous as assumed by simply considering them as offsets of glacial populations located in southern peninsulas. As such, they might have evolved distinctive genetic adaptations during glacial vicariance, worth evaluating and considering for conservation. 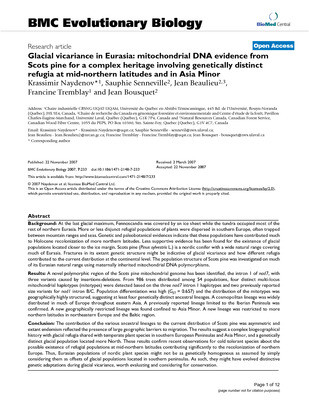