Kalmia angustifolia is a boreal ericaceous shrub that can rapidly spread on black spruce forest cutovers in eastern Canada, where CPRS (i.e. Cutting with Protection of Regeneration and Soils") is practiced. The proliferation of Kalmia often coincides with a reduction in the growth rate of regenerating black spruce seedlings. We report on a study where we compared the local effects of Kalmia and black spruce seedling patches (i.e. two types of "Vegetation") on chemical and biochemical soil properties in CPRS cutovers within mesic sprucemoss and xeric spruce-lichen ecosystems, as well as in four mature spruce-moss forests (i.e. three "Site Types"). Results from 13C-CPMAS-NMR revealed lower O-alkyl C (i.e. carbohydrates), higher aromatic C (i.e. lignin and other phenolics) and higher carbonyl-C (i.e. amide-C and carboxyl groups) in spruce-moss than in spruce-lichen forest floors (F-horizon). In spite of these distinctions, we observed only a small number of Site Type x Vegetation interactions controlling soil properties. Vegetation had a significant effect on ten forest floor properties. Most notably, Kalmia patches had higher concentrations of condensed tannins and lower mineral N cycling. On the other hand, Site Type had a relatively greater effect on the deeper podzolic-B horizons, where mineral N and microbial activity were higher in mature spruce-moss forests than in the cutovers. Green and senescent Kalmia leaves collected at these sites had higher N, tannin and phenolic concentrations than green and senescent spruce needles. A 25 month litter bag study found lower decomposition of Kalmia leaf litter in spruce patches on spruce-lichen cutovers compared to spruce patches on spruce-moss cutovers, or to Kalmia patches on spruce-lichen cutovers. Given that black spruce seedlings obtain most of their nutrients from the forest floor, our results suggest that CPRS may have long-term negative effects on black spruce forest productivity if the spread of Kalmia is left unchecked.

Kalmia angustifolia is an ericaceous shrub that can spread rapidly on black spruce forest cutovers in eastern Canada, especially where CPRS (Cut with Protection of Regeneration and Soils; i.e., careful logging) is practiced. This is widely used in Quebec to minimize soil disruption and protect black spruce regenerating naturally under the canopy, but it also encourages increasing cover of kalmia, which reduces black spruce growth. This is partly due to its high content of condensed tannins which reduces soil nitrogen availability. Building on previous studies, we investigated the effects of Kalmia patches on soil properties and leaf decomposition in cutovers and mature forests. The effects of Kalmia were fairly consistent across different site types. Most notably, Kalmia patches increased tannins and lowered mineral N cycling in forest floor, the source of most nutrients for black spruce seedlings. Black spruce forest productivity may be reduced without measures to manage the spread of kalmia after harvesting. These include mechanical scarification on CPRS sites, or avoidance of early thinning which increases the light available to understorey plants. 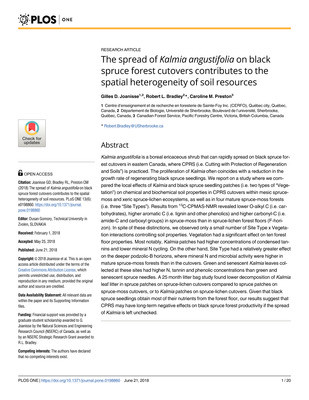