Pestalopezia brunneopruinosa, the type species of Pestalopezia in Leotiomycetes, produces typical cup-shaped ascomata. Because its asexual morph has conidia comprised of five cells including apical and basal appendages and three pigmented median cells, it was first described as Pestalotia gibbosa, which belongs to Sordariomycetes. This contradiction has not been resolved due to the difficulty in isolating this fungus in culture. In this study, we isolated separate strains from the sexual morph and the asexual morph for molecular analysis. Phylogenetic trees of Sporocadaceae based on internal transcribed spacer, partial β-tubulin, and partial translation elongation factor 1-alpha sequence datasets revealed that both strains fall into the same taxon, in a clade in Pestalotiopsis sensu stricto alongside P. gaultheriae and P. spathulata. We provide the first evidence that fungi producing cup-shaped ascomata in Pestalotiopsis belong to Sordariomycetes, and we have proposed the transfer of Pestalopezia brunneopruinosa to Pestalotiopsis gibbosa.

This paper is the result of collaboration with the senior author during visits to the Pacific Forestry Centre over the past two years. It is an in-depth taxonomic analysis of a group of plant pathogenic fungi (Pestalotiopsis and related genera) causing cankers and leaf spots. We collected both Pestalopezia brunneopruinosa and Pestalotiopsis gibbosa in BC on salal (Gaultheria shallon) which is the same host for the specimens used in original descriptions of both fungi, and we were successful in culturing both fungi and were able to compare them molecularly to confirm that they were different life forms of the same species. Our results provide the first evidence that fungi producing cup-shaped ascomata in Pestalotiopsis can belong belong to Sordariomycetes, and we have proposed the transfer of Pestalopezia brunneopruinosa to Pestalotiopsis gibbosa. Our research required a re-description of one species adding new morphological information, plus a subsequent transfer to a different genus, and a very unique fruiting body type added to the delimitation of the fungal family Sordariomycetes. Taxonomic and nomenclatural clarity is essential for proper diagnostics and phytosanitary regulation. 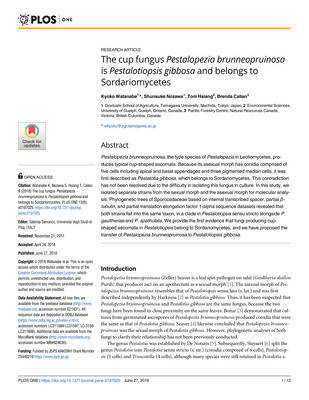