The Emerald Ash Borer (EAB) is an invasive wood-borer indigenous to Asia that has caused widespread mortality of North American ash. Since its accidental introduction in North America that can be traced back to 1990, EAB infestations have been identified in twenty-five American states and five Canadian provinces. EAB larvae feed from spring to mid-summer on the phloem and outer xylem tissue, which disrupt the translocation of nutrients and water that results in the ultimate death of the tree. In North America, the EAB threatens all of the North American species, including Green ash, White ash, Red ash, Northern red ash, and Black ash. Pumpkin ash and Oregon ash trees have been reported as being seldomly attacked by EAB. However, blue ash has been reported to be somewhat resistant in comparison to green and white ashes, especially where they co-occur. On the other hand, Manchurian ash, which is the preferred host of EAB in China is resistant to EAB infestation, because of its co-evolutionary history. The presence of defensive compounds upregulated in Manchurian ash suggests their potential role in providing constitutive resistance to EAB, and reflects its co-evolutionary history with EAB. This study aims to investigate the metabolomic composition of six species: green, Manchurian, blue, black, pumpkin and white ashes using HPLC-MS/MS and untargeted metabolomics. In addition, we have provided a comparison of metabolites between Manchurian and blue ashes that have varying levels of resistance to EAB. To the best of our knowledge, this study represents the first report using HPLC-MS/MS combined with autonomous untargeted metabolomic profiling in examining the foliar chemistry of six species, and in describing the potential role that defensive polyphenolic compounds may play in providing resistance to EAB. 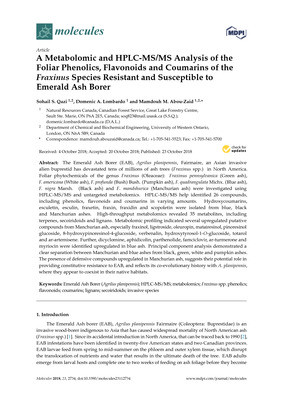