In this paper, we tested a sampling device that grabs the wool of the non-native hemlock woolly adelgid during a sample. This device is a racquetball covered with Velcro® and filled with wooden beads that is launched from a slingshot. We evaluated the ballistics of this device, how likely it is to trap wool during flight and landing and how likely it is to lose or retain any trapped wool during flight and landing. We also compared this technique to visual survey, pole pruning and tree climbing. This device has the potential to sample from the very top of tall trees (30 m) as compared to operational surveys that focus on foliage within 3 m of the ground. We found that wool is most likely to be trapped when the ball flies up through the crown. Wool trapped in the Velcro® on the ball is not likely to be removed during flight and landing but caution should be taken when sampling near water or mud as landing on these surfaces can obscure any wool on the ball. The ball sampling technique is more effective than visual survey or tree climbing and similar to pole pruning. This is because many adelgid infestations were located in the outer portion of the middle and upper crown. False negative rate of this technique is relatively low (15%). This work has impact on detection surveys for hemlock woolly adelgid because it makes possible the sampling of the entire crown, which improves early detection of this exotic pest. 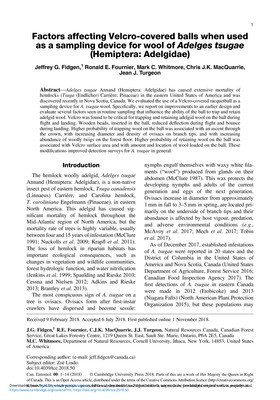