Context Fires and insect outbreaks are important agents of forest landscape change, but the classification and distribution of these combined processes remain unstudied aspects of forest disturbance regimes.

Objectives We sought to map areas of land characterized by homogenous fire regime (HFR) attributes and by distinctive combinations of fire, bark beetles and defoliating insect outbreaks, and how their distribution might change should current climatic trends continue.

Conclusions When describing forest disturbance regimes, it is important to consider the combined and possibly interacting agents of tree mortality, which can result in emergent properties not predictable from any single agent. 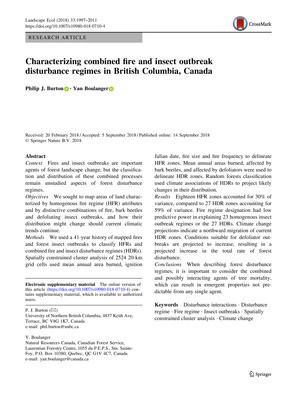