Wood turtles are a forest-dependent species, listed internationally, federally and provincially as being at risk. Approximately 30% of the global distribution of the species is considered to be in Canada, where disjunct populations occur across the eastern boreal transition ecoregion in several provinces. This paper is the first in a series resulting from a collaborative multi-year research effort involving the Algoma Highlands Conservancy, the Ontario Ministry of Natural Resources and Forests and the Canadian Forest Service of Natural Resources Canada. For the first time in the peer reviewed literature, we report on the structure, size, age and sex-ratios for each of two independent populations of Wood Turtles in the Algoma Region. These population occur at the extreme northwestern periphery of the species range in Canada and represent the largest number of uniquely marked individuals documented in a Canadian population. The general health of the two study populations was evidenced by the numerous large and reproductively mature individuals of both sexes, relatively high percentage of juveniles observed and size-class frequency distributions which indicated sustained juvenile recruitment over several years in both watersheds. Our results also suggest that use of a trained canine significantly improves detection efficiency for Wood Turtles in complex habitats and provides improved, unbiased estimation of female:male as well as juvenile:adult sex ratios. Both of these metrics together total number of individuals are important in estimating long term population viability. To our knowledge, this is also the first documentation of advantages of using trained canines in studies of this at risk species. Moreover, our data indicate that high quality forested watershed habitats, even at the northwestern extreme of the species range in Canada, can and do support large, healthy populations of Wood Turtles and that mitigative measures put in place by provincial authorities to protect these populations are effective. 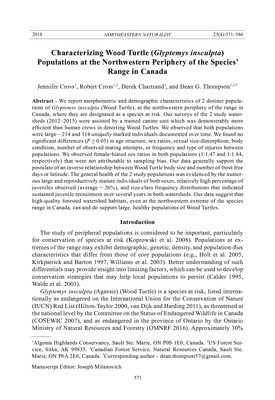