Ichnoviruses (IVs) are mutualistic, double-stranded DNA viruses playing a key role in the successful parasitism of thousands of endoparasitoid wasp species. IV particles are produced exclusively in the female wasp reproductive tract. They are co-injected along with the parasitoid egg into caterpillar hosts upon parasitization. The expression of viral genes by infected host cells leads to an immunosuppressive state and delayed development of the host, two pathologies that are critical to the successful development of the wasp egg and larva. Ichnovirus is one of the two recognized genera within the family Polydnaviridae (polydnaviruses or PDVs), the other genus being Bracovirus (BV), associated with braconid wasps. IVs are associated with ichneumonid wasps belonging to the subfamilies Campopleginae and Banchinae; attempts to identify IV particles in other ichneumonid subfamilies have so far been unsuccessful. Functional studies targeting IV genes expressed in parasitized hosts, along with investigations of the molecular mechanisms responsible for viral morphogenesis in the female wasp, have resulted in a better understanding of the biology of these atypical viruses. 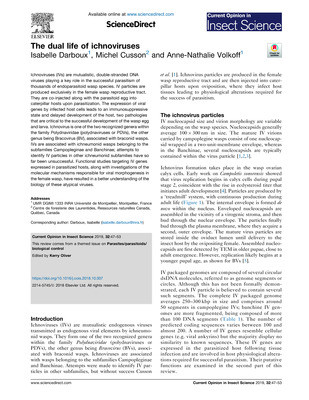