We used a hybrid-biometric modelling approach that combines tree-ring based stand reconstruction and the Carbon Budget Model of the Canadian Forest Sector (CBM-CFS3) to estimate past magnitude and inter-annual variation of net primary production (NPP), net ecosystem production (NEP), and heterotrophic respiration (Rh) in plots located within the footprint of an eddy-covariance (EC) installation in a Douglas-fir stand of 1949 origin (DF49 or AmeriFlux CA-Ca1). Stand reconstruction estimated NEP showed excellent correspondence with EC-estimated NEP over the period 1998–2010 (r2 = 0.79, mean difference 24 gC m−2 year−1). Estimates of carbon use efficiency, aboveground NPP, and post-disturbance C dynamics following the harvest of DF49 in 2011 showed discrepancies between modelled estimates and independent data, which were attributed to underestimates of coarse litterfall in previous field studies and to uncertainty in the production, turnover, and post-mortality decay of non merchantable woody biomass in the CBM-CFS3. Despite these issues, the results provide further evidence of the potential use of tree-ring data to expand the availability of long-term estimates of annual ecosystem production and their ability to increase our understanding of forest C dynamics

Understanding how fast trees are growing is very important if we want to know how much carbon is being removed from the air by forests in Canada. It is hard to this, and so scientists have to try different methods and see now they compare. In this paper, we used two different methods: first, we measured the amount of carbon dioxide in the air going into and out of the forest about every minute using instruments attached to tall towers above the forests; this is called “eddy covariance”. Second, we extracted core samples from trees under the tower and then measured the width of the annual rings; that information was fed into a computer model called the Carbon Budget Model of the Canadian Forest Sector (CBM-CFS3). We used both methods to come up with an estimate of the “net ecosystem production”, which is the amount of carbon the forest absorbs each year, for several years between 1985 and 2010. Over that time, the two methods had similar outputs. 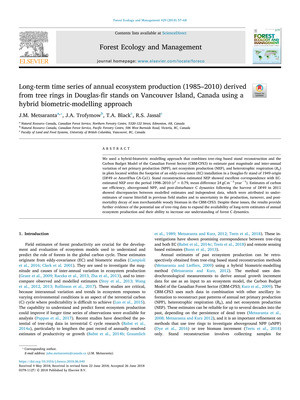