Energy and water limitations of tree growth remain insufficiently understood at large spatiotemporal scales, hindering model representation of interannual or longer-term ecosystem processes. By assessing and statistically scaling the climatic drivers from 2710 tree-ring sites, we identified the boreal and temperate land areas where tree growth during 1930–1960 CE responded positively to temperature (20.8 ± 3.7 Mio km2; 25.9 ± 4.6%), precipitation (77.5 ± 3.3 Mio km2; 96.4 ± 4.1%), and other parameters. The spatial manifestation of this climate response is determined by latitudinal and altitudinal temperature gradients, indicating that warming leads to geographic shifts in growth limitations. We observed a significant (P < 0.001) decrease in temperature response at cold-dry sites between 1930–1960 and 1960–1990 CE, and the total temperature-limited area shrunk by −8.7 ± 0.6 Mio km2. Simultaneously, trees became more limited by atmospheric water demand almost worldwide. These changes occurred under mild warming, and we expect that continued climate change will trigger a major redistribution in growth responses to climate.

In this study, researchers quantified tree growth responses to climate variables using annual tree growth ring data from boreal and temperate forests and climate data from around the world. They also quantified the evolution of these responses between the periods ranging from 1930 to 1960 and from 1960 to 1990.

The researchers show that, due to climate change phenomena already experienced within the last century, drought has become the primary limiting factor to tree growth worldwide. They also observe that this phenomenon is very pronounced in boreal forests, especially in Canada. Water availability has replaced energy as the main limiting factor for a large portion of the boreal forest. It is expected that this dependence on the availability of water for growth will increase further with anticipated climate changes.

Tree growth varies according to climatic factors and CO2 concentration levels in the atmosphere. Despite the fact that CO2 promotes tree growth, the increase in temperatures during the summer months offsets this effect by reducing available water levels in the soil. These observations highlight the ecological sensitivity of the Canadian boreal forest to pattern changes in the hydrological cycle.

This article is a logical follow-up to an earlier study published in 2016 (Girardin et al. 2016; Proc. Nat. Acad. Sciences). In the previous study, the relationship between climate and growth shows that, towards the end of the 20th century, the effects of variation in water availability on the growth of the Canadian boreal forest have intensified. It was shown that the rapid increase in summer temperatures has had a negative impact on this dependency on water availability. However, in this new study, the authors sought to establish whether this increased dependency on water for growth was also perceptible on a worldwide scale. 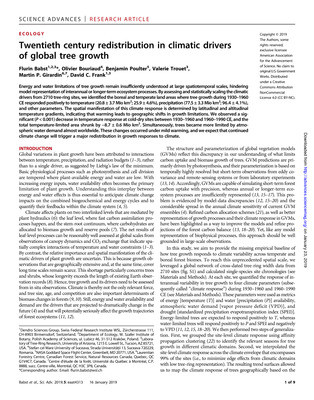