With climate change, natural resource managers are faced with the challenging task of planning the conservation of habitat for threatened species. Classified as "threatened" under the Species at Risk Act in Canada, the Bicknell's Thrush (Catharus bicknelli - BITH) is a migratory bird whose range is highly restricted. Bioclimatic models project more than 50% loss of suitable habitat - high elevation dense balsam fir (Abies balsamea) forests - in the northeastern USA by 2050 due to climate change. We used BITH as a case study to demonstrate the value of forest landscape models (e.g., LANDIS-II) to support decision making on conservation of habitat of threatened species. We modeled the impacts of forest management and natural disturbances, as well as climate-induced changes, on forest stand and landscape structure. Under RCP climate forcing scenarios 2.6, 4.5 and 8.5, simulations projected significant changes in dominant tree species biomass, from coniferous to broadleaved deciduous, implying important losses of mature balsam fir forest. Climate change was projected to have severe effects with major changes projected to occur after 2080 and losses of more than half of BITH suitable habitat by 2100 for “worst-case” climate change scenarios. This contrasts with results from bioclimatic models which do not capture the expected lags in vegetation responses to changing climate. Our results also suggest that innovative forest management strategies could help maintain BITH habitat abundance under RCP 2.6 and RCP 4.5 climate forcing. Such results can provide guidance for considering effective long-term conservation of habitat for threatened species in a changing world.

Using state-of-the-art landscape modeling, Environment and Climate Change Canada (ECCC) and Natural Resources Canada (NRCan) scientists are able to predict how Bicknell's Thrush habitat will evolve under a changing climate in Canada. Classified as "threatened" under the Species at Risk Act in Canada, and as “vulnerable” under the International Union for Conservation of Nature Red List of Threatened Species, the Bicknell's Thrush is a migratory bird whose breeding range is highly restricted to high elevation dense balsam fir forests found in eastern Canada and northeastern US. Climate change is considered a major threat to its habitat as balsam fir forests are projected to decline significantly in eastern Canada in coming decades as mean temperatures and drought increase. ECCC and NRCan scientists have modeled the impacts of climate change on these habitats using forest landscape models (FLM), which can simulate forest disturbances, such as forest harvesting, wildfire, insect outbreaks, and seed dispersal based on many ecological processes. Such models have the potential to project climate-induced vegetation shifts, and provide the possibility to test the effectiveness of different forest management scenarios. The team’s projections show that climate change and conventional harvesting scenarios will have major impacts on the forest landscapes of eastern Canada. Specifically, they predict increases in the amount of temperate and deciduous species, although habitats at higher elevation are more resilient to these changes. This will lead to significant reductions in the suitable habitat for Bicknell’s Thrush in Canada. This work demonstrates the value of FLM to support decision-making on conservation of habitat of threatened species, to provide guidance for considering effective long‐term conservation of habitat and recovery planning for threatened species in a changing world. 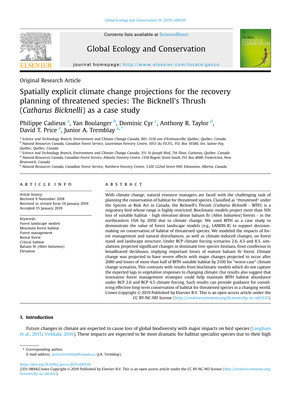