We assess the protective function of Canada’s parks and protected areas (PPAs) by analyzing three decades of stand-replacing disturbance derived from Landsat time series data (1985–2015). Specifically, we compared rates of wildfire and harvest within 1,415 PPAs against rates of disturbance in surrounding greater park ecosystems (GPEs). We found that disturbance rates in GPEs were significantly higher (p < 0.05) than in corresponding PPAs in southern managed forests (six of Canada’s 12 forested ecozones). Higher disturbance rates in GPEs were attributed to harvesting activities, as the area impacted by wildfire was not significantly different between GPEs and PPAs in any ecozone. The area burned within PPAs and corresponding GPEs was highly correlated (r = 0.90), whereas the area harvested was weakly correlated (r = 0.19). The average area burned in PPAs/GPEs below 55° N was low (0.05% yr−1) largely due to fire suppression aimed at protecting communities, timber, and recreational values, while the average burn rate was higher in northern PPAs/GPEs where fire suppression is uncommon (0.40% yr−1 in PPAs/GPEs above 55° N). Assessing regional variability in disturbance patterns and the pressures faced by PPAs can better inform policy and protection goals across Canada and the globe.

The establishment and maintenance of parks and protected areas (PPAs) remains a critical management goal designed to protect habitat and ensure the maintenance of ecological goods and services. Wall-to-wall information on disturbance history, derived from satellite remote sensing, allows the protective function of PPAs to be assessed, as disturbance rates within PPAs can be compared against disturbance rates in surrounding greater park ecosystems (GPE). Our results show the influence of harvesting and active fire suppression in the GPEs of southern Canadian parks, while northern PPAs and GPEs are dominated by natural fire patterns. By assessing the regional variability in disturbance pressures faced by Canada’s PPAs and GPEs, we can better inform protection goals across Canada’s jurisdictions and management agencies. 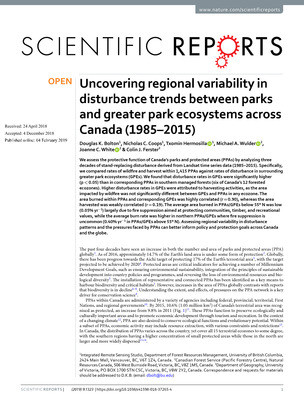