The recent outbreak of the mountain pine beetle (Dendroctonus ponderosae; MPB) has affected over 20 M hectares of pine forests in western North America. During the colonization of host trees, female MPB release the aggregation pheromone (−)-trans-verbenol. (−)-trans-Verbenol is thought to be produced from the pine defense compound (−)-α-pinene by cytochrome P450 (P450) dependent hydroxylation. MPB may also use P450s for the detoxification of other monoterpenes of the pine defense system. Here we describe the functional characterization of MPB CYP6DE1. CYP6DE1, but not the closely related CYP6DE2, used the bicyclic monoterpenes (−)-α-pinene, (+)-α-pinene, (−)-β-pinene, (+)-β-pinene and (+)-3-carene as substrates. CYP6DE1 was not active with other monoterpenes or diterpene resin acids that were tested as substrates. trans-Verbenol is the major product of CYP6DE1 activity with (−)-α-pinene or (+)-α-pinene as substrates. When tested with blends of different ratios of (−)-α-pinene and (+)-α-pinene, CYP6DE1 produced trans-verbenol with an enantiomeric profile that was similar to that produced by female MPB exposed to the α-pinene enantiomers. 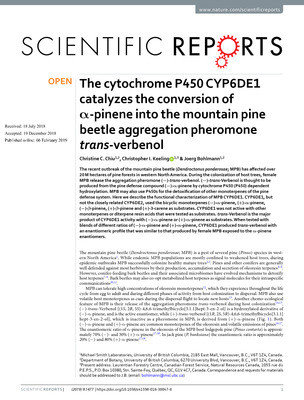