Christmas trees produced in Quebec, Canada, mostly include balsam fir (Abies balsamea), which is a species susceptible to Delphinella shoot blight. Over the past decade, the Canadian forests and Christmas tree industry have encountered an increase in Delphinella shoot blight, and only a few studies have assessed and quantified the damage caused by this disease. The different developmental stages of the disease were studied and the presumed causal pathogenic agent was isolated from infected needles in this work. Delphinella balsameae was isolated less frequently than its phylogenetically closely related pathogen Sydowia polyspora. Furthermore, species-specific PCR protocols to detect both D. balsameae and S. polyspora were developed and the occurrence of these species in infected and symptomless needles sampled in Christmas tree plantations was evaluated. While D. balsameae was detected only in diseased needles, S. polyspora was frequently found in both asymptomatic needles and in needles displaying shoot blight. Experiments showed that D. balsameae is the more prevalent agent associated with fir tree shoot blight in Quebec. 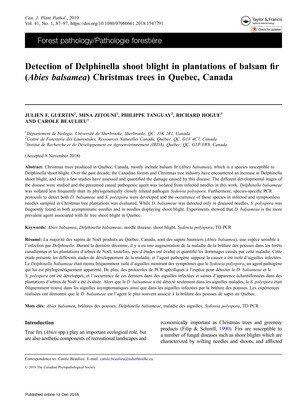