Wildfire is the primary abiotic disturbance in the boreal forest, and its long-term absence can lead to large changes in ecosystem properties, including the availability and cycling of nutrients. These effects are, however, often confounded with the effects of successional changes in vegetation toward nutrient conservative species. We studied a system of boreal forested lake islands in eastern Canada, where time since last fire ranged from 50 to 1500 years, and where the relative abundance of the most nutrient conservative tree species, black spruce, was largely independent of time since last fire. This allowed us to disentangle the effects of time since fire and the dominant vegetation on ecosystem properties, including nutrient stocks and concentrations. Effects of time since fire independent of vegetation composition mostly involved an increase in the thickness of the organic layer and in nitrogen concentration in both soil and leaves. Domination by black spruce had strong negative effects on nutrient concentrations and was associated with a shift toward more fungi and Gram-positive bacteria in the soil microbial community. Path modeling showed that phosphorus concentration was inversely related to organic layer thickness, which was in turn related to both time since fire and black spruce abundance, while nitrogen was more directly related to time since fire and the composition of the overstory. We conclude that discriminating between the effects of vegetation and time since fire is necessary for better understanding and predicting the long-term changes that occur in forest nutrient availability and ecosystem properties. 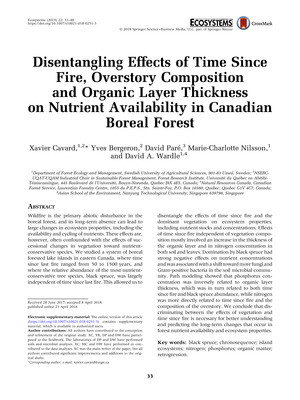