Climate change is predicted to alter relationships between trophic levels by changing the phenology of interacting species. We tested whether synchrony between two critical phenological events, budburst of host species and larval emergence from diapause of eastern spruce budworm, increased at warmer temperatures in the boreal forest in northeastern Canada. Budburst was up to 4.6 ± 0.7 days earlier in balsam fir and up to 2.8 ± 0.8 days earlier in black spruce per degree increase in temperature, in naturally occurring microclimates. Larval emergence from diapause did not exhibit a similar response. Instead, larvae emerged once average ambient temperatures reached 10°C, regardless of differences in microclimate. Phenological synchrony increased with warmer microclimates, tightening the relationship between spruce budworm and its host species. Synchrony increased by up to 4.5 ± 0.7 days for balsam fir and up to 2.8 ± 0.8 days for black spruce per degree increase in temperature. Under a warmer climate, defoliation could potentially begin earlier in the season, in which case, damage on the primary host, balsam fir may increase. Black spruce, which escapes severe herbivory because of a 2‐week delay in budburst, would become more suitable as a resource for the spruce budworm. The northern boreal forest could become more vulnerable to outbreaks in the future. 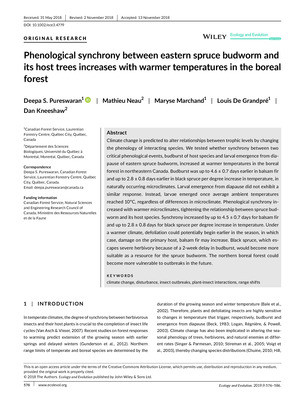