Context Forest landscapes at the boreal–temperate ecotone have been extensively altered. Reducing the gap between current and presettlement forest conditions through ecosystem-based forest management (EBFM) is thought to enhance ecological integrity. However, climate change may interfere with this goal and make these targets unrealistic.

Objectives We evaluated the impacts of climate change on the ability of EBFM to reduce discrepancies between current and presettlement forest conditions in southeastern Canada. 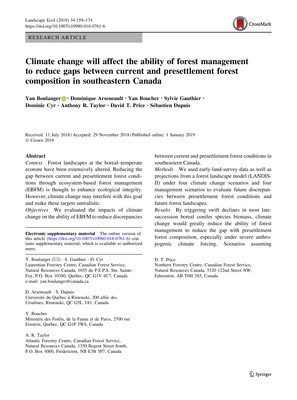