The influence of environmental temperature and humidity on the elevational and temporal distributions of rove beetles (Coleoptera: staphylinidae) in a Quercus L. Forest in Jalisco, Mexico. 2019. Rogriguez, W.D.; Navarrete-Heredia, J.L.; Klimaszewski, J. The Coleopterists Bulletin 73(1): 202-224.

We analyzed the influence of humidity, temperature, and temporal and elevational distribution on the composition, abundance, and richness of rove beetle assemblages captured with carrion traps in a Quercus L. forest, Cerro de Garcia, Jalisco, Mexico. Four sites with elevations ranging 2,100–2,700 m were surveyed. Beetles were captured monthly from September 2013 to August 2014. Three carrion traps were set at each sampling site, separated by 100 m distance. At each site, a data-logger was used to record temperature and humidity. In total, 18,054 rove beetles were captured, belonging to nine subfamilies, 11 tribes, 33 genera, and 75 species. The rove beetle assemblage showed the highest diversity during the rainy season (q = 0, 1 and 2) and the lowest during the dry season. The composition of the assemblage at 2,700 m elevation was mainly influenced by humidity and at 2,100 m by temperature. Beta diversity in the Quercus forest at different elevations and collecting periods was best explained by species replacements (shifts), and the interaction of humidity and temperature. 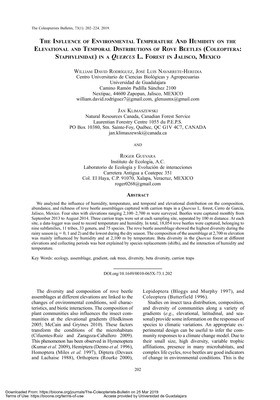