The depth at which pitfall traps were sunk into the ground and the resulting catches of epigaeic Carabidae (Coleoptera) and Staphylinidae (Coleoptera) assemblages in subhygric to hydric ecosites with very deep organic soil layers was investigated in the upper foothills ecoregion of Alberta, Canada. Traps were installed at seven sites, with six surface traps (the pitfall trap lip < 5 cm below soil surface) and six deep traps (the pitfall trap lip > 20 cm below soil surface) at each site. A total of 5289 beetles representing 75 taxa were collected. There were no significant effects of trap depth on catch. Rarefaction estimates of species diversity were higher in surface pitfall traps for both taxa. The similarity of pooled catches between deep and surface traps was on average 75%, suggesting that both trap types were collecting similar faunas. We found no advantage to using deep pitfall traps in addition to surface traps to sample the epigaeic fauna of wet forest stands and peatlands.

Semiaquatic landscapes are increasingly being explored for possible industrial development, such as oil and gas extraction. Little is known about the arthropods (e.g., insects, spiders, and crustaceans) that live in these areas and about how they might respond to long-term disruption of their habitat. Pitfall traps that capture arthropods at the soil surface are commonly used to sample arthropods in forests. It is more challenging to sample arthropods in wetter areas where there is a porous matrix below the surface, because arthropods may be active both on and below the surface. The authors of this study looked at the effectiveness of pitfall trap sampling for one type of arthropod (beetles) in wet forested sites in the lower foothills of Alberta, Canada. In May 2005, they set some traps at the surface and sank others 20–30 cm below the surface. They counted the beetles they trapped in each type of trap and determined how many different species they captured over the summer. Their results suggest that there is no advantage to using deep pitfall traps in addition to surface traps to sample the beetles in wet forest stands. 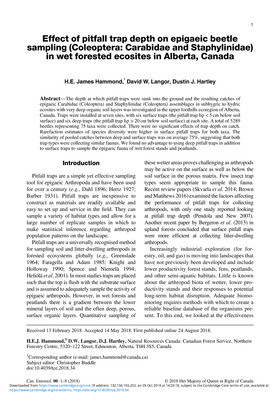