A vulnerability assessment of Canada’s forest health monitoring (FHM) policies and practices was undertaken by the Forest Pest Working Group (FPWG) of the Canadian Council of Forest Ministers (CCFM) to determine if adaptation of FHM policies and practices is required in light of climate change. Vulnerability is defined as the degree to which a system is susceptible to, and unable to cope with, adverse effects of climate change, including climate variability and extremes; it is a function of the character, magnitude, and rate of climate change and variation to which its system is exposed, its sensitivity, and its adaptive capacity (Parry et al. 2007)1. The emphasis of this assessment was on the human adaptation aspect, not the biophysical. Hence, it does not address means to improve forest resilience to disturbances, but rather the collective ability to capture and report on those disturbances. This is commonly referred to as the “adaptive capacity”.

The FHM system, for the purposes of this report, includes forest health monitoring of biotic, abiotic, and invasive alien pests by provincial, territorial, and federal governments, which varies across Canada. The assessment found that the FHM system was vulnerable to climate-induced changes in that the ability to meet forest health monitoring objectives would be compromised. This means that adaptation is required. This report outlines and discusses the components of the vulnerability assessment, including identification of adaptation options and implementation requirements.

Also available under the title:
Vulnerability assessment of forest health monitoring policies and practices under a changing climate: Adaptation, implementation and evaluation (English) 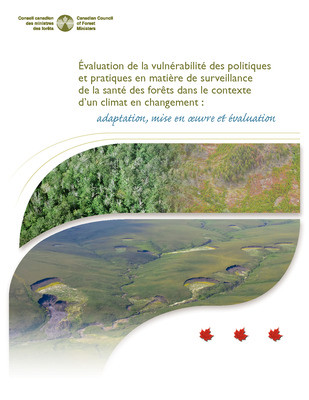