Boreal woodland caribou (Rangifer tarandus caribou) are currently listed as threatened in Canada, with populations in the province of Alberta expected to decline as much as 50 percent over the next 8–15 yr. We assessed the future of caribou habitat across a region of northeast Alberta using a model of habitat‐quality and projections of future climate from three general circulation models. We used mapped climatic and topo‐edaphic properties to project future upland vegetation cover and a fire simulation model to project the frequency and extent of wildfires. Based on those projections, we quantified the future habitat of caribou according to estimates of nutritional resources and predation risk derived from vegetation cover type and stand age. Grassland vegetation covered up to half of the study area by the 2080s, expanding from

Boreal woodland caribou are listed as threatened in Canada, and populations in Alberta are declining rapidly. A warming climate has a number of potential negative consequences for boreal woodland caribou, including loss of their forest habitat, increased predation, and increased prevalence of diseases. The authors of this study assessed the future of caribou habitat across a region of northeastern Alberta using a model of vegetation cover change. The authors used a wildfire simulation model, which predicted increasing wildfire frequency driving vegetation change. Their projections suggest that the study area will be dramatically altered by the 2080s. Up to half of today’s forested uplands may be converted into grassland, attracting increasing numbers of white-tailed deer. The deer will in turn attract increasing numbers of wolves, which are the boreal woodland caribou’s main predator. The northward spread of white-tailed deer populations may also increase the caribou’s risk of disease. Taken together, these changes will make it challenging for caribou populations to recover. The study’s findings highlight the pressing need for widespread efforts to conserve the boreal woodland caribou in Canada. 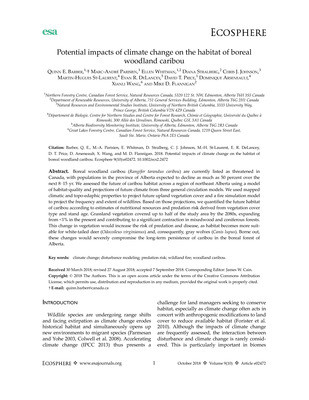