Tree mortality is a key driver of forest dynamics and its occurrence is projected to increase in the future due to climate change. Despite recent advances in our understanding of the physiological mechanisms leading to death, we still lack robust indicators of mortality risk that could be applied at the individual tree scale. Here, we build on a previous contribution exploring the differences in growth level between trees that died and survived a given mortality event to assess whether changes in temporal autocorrelation, variance, and synchrony in time-series of annual radial growth data can be used as early warning signals of mortality risk. Taking advantage of a unique global ring-width database of 3065 dead trees and 4389 living trees growing together at 198 sites (belonging to 36 gymnosperm and angiosperm species), we analyzed temporal changes in autocorrelation, variance, and synchrony before tree death (diachronic analysis), and also compared these metrics between trees that died and trees that survived a given mortality event (synchronic analysis). Changes in autocorrelation were a poor indicator of mortality risk. However, we found a gradual increase in interannual growth variability and a decrease in growth synchrony in the last ~20 years before mortality of gymnosperms, irrespective of the cause of mortality. These changes could be associated with drought-induced alterations in carbon economy and allocation patterns. In angiosperms, we did not find any consistent changes in any metric. Such lack of any signal might be explained by the relatively high capacity of angiosperms to recover after a stress-induced growth decline. Our analysis provides a robust method for estimating early-warning signals of tree mortality based on annual growth data. In addition to the frequently reported decrease in growth rates, an increase in inter-annual growth variability and a decrease in growth synchrony may be powerful predictors of gymnosperm mortality risk, but not necessarily so for angiosperms.

More trees are expected to die in the future because of climate change. Even though we understand some of the reasons why trees might die, we still don’t have good ways of predicting which individual trees will die during a stress event and which ones will survive. We looked at how trees that died grew while they were alive, to see if there might be early warning signals of death. We also compared the growth characteristics of trees that died during a stress event and neighbouring trees that survived the event at 198 places around the world, to see if the two sets of trees grew differently. We measured the width of the annual growth rings of both living and dead trees. For gymnosperm trees, which have needles that generally stay green all winter, we found that about 20 years before trees died, they started having different growth patterns than trees that survived. For angiosperm trees, which are trees that generally lose their leaves in the winter, there was no consistent way of telling which trees might die. This means that angiosperm trees might be better able to recover from bad conditions quickly than gymnosperm trees. 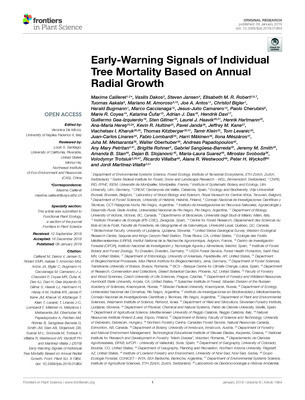