Insects defoliate and kill plants in many ecosystems worldwide. The consequences of these natural processes on terrestrial ecology and nutrient cycling are well established, and their potential climatic effects resulting from modified land–atmosphere exchanges of carbon, energy, and water are increasingly being recognized.We developed a Marauding Insect Module (MIM) to quantify, in the Integrated BIosphere Simulator (IBIS), the consequences of insect activity on biogeochemical and biogeophysical fluxes, also accounting for the effects of altered vegetation dynamics. MIM can simulate damage from three different insect functional types: (1) defoliators on broadleaf deciduous trees, (2) defoliators on needleleaf evergreen trees, and (3) bark beetles on needleleaf evergreen trees, with the resulting impacts being estimated by IBIS based on the new, insect-modified state of the vegetation. MIM further accounts for the physical presence and gradual fall of insect-killed dead standing trees. The design of MIM should facilitate the addition of other insect types besides the ones already included and could guide the development of similar modules for other process-based vegetation models. After describing IBIS–MIM, we illustrate the usefulness of the model by presenting results spanning daily to centennial timescales for vegetation dynamics and cycling of carbon, energy, and water in a simplified setting and for bark beetles only. More precisely, we simulated 100% mortality events from the mountain pine beetle for three locations in western Canada. We then show that these simulated impacts agree with many previous studies based on field measurements, satellite data, or modelling. MIM and similar tools should therefore be of great value in assessing the wide array of impacts resulting from insect-induced plant damage in the Earth system.

Outbreaks of damaging insect pests like mountain pine beetle (MPB) and spruce budworm not only devastate forests but also affect how carbon, nutrients, energy and water are exchanged with their surroundings. In this way, insect damage can influence the ecosystem and even the climate. The objective of this publication is to report on a new computer model (the marauding insects module or MIM) that simulates effects of insect pests on forests and on the environmental and economic benefits they provide. The paper describes the first version of the model and results of testing at three locations in British Columbia where data have been collected for stands of lodgepole pine attacked by MPB. The model produced realistic results for changes in the forest during and following an insect attack, agreeing with previous studies based on field measurements and satellite data. It also showed how the changes caused by insects vary with climatic factors, which can impose further stresses on the forest. This is one of the first attempts at developing such a model. It is designed to represent several different types of insect pests and to be linked to a variety of other ecological models, including several being used by the Canadian Forest Service. 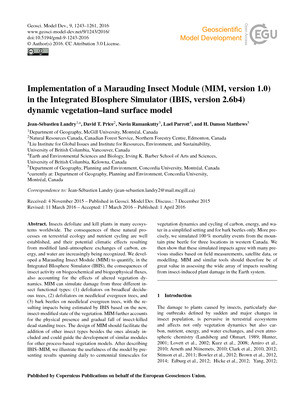