Spruce budworm (Choristoneura fumiferana) outbreaks are important disturbance events in the boreal forests of northeastern North America, causing major growth loss and widespread tree mortality. The physiological mechanisms leading to tree mortality remain poorly understood and two important functional traits, tree-ring width and concentration of stored carbohydrate, can serve as indicators of tree vitality during defoliation. This study aims to test the hypothesis that storage starch is an indicator of tree vitality by (1) exploring the link among reductions in storage, growth and mortality, and (2) identifying starch or sugar threshold to predict the risk of mortality. We use balsam fir and black spruce, two main host species of spruce budworm. We sampled 81 trees across seven experimental sites in eastern Quebec, Canada, and assessed defoliation intensity, tree-ring growth, and tree vitality. Soluble sugar and starch concentrations in needles, twigs, and roots were measured from spring to autumn. Under conditions of increased defoliation, carbon allocation to reserves and radial growth decreased in a similar manner for both species. Starch concentration within twigs and needles in May and June was the best indicator of carbon status in defoliated trees. We observed the highest reductions in growth two to 3 years prior to mortality concurrently with reductions in starch in May and June. When starch concentrations were lower than 28 mg·g-1dw in needles, the probability of balsam fir mortality exceeded 50%. At this level of starch, reserves and newly produced carbon are insufficient to support tree growth and vitality. 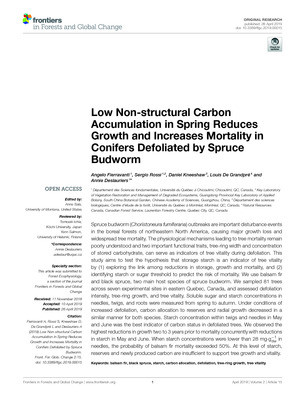