Studying the response of wildlife to anthropogenic disturbances in light of their evolutionary history may help explain their capacity to adapt to novel ecological conditions. In the North American boreal forest, wildfire has been the main natural disturbance driving ecosystem dynamics for thousands of years. Boreal caribou (Rangifer tarandus caribou) is a threatened ungulate for which widespread decline has been associated with the rapid expansion of timber harvesting across its range. Although caribou may not be adapted to this new type of disturbance, cutovers share many similarities with wildfires by producing large landscapes of whole-stand removal associated with an increased predation risk for caribou. We hypothesized that caribou with more evolutionary experience of fire disturbance should better perceive the cues associated with disturbances and adjust their behavior toward human disturbance accordingly. Given the extensive distribution of caribou populations in the boreal forest, we assessed how their historical exposure to wildfires could explain their behavioral response toward both burned and cutover areas. Our results indicate that caribou from regions with high historical burn rates displayed a consistent avoidance of recent burns (<5 yr old), and that this behavior translated in a similar avoidance of recent cutover, providing support to the cue similarity hypothesis. On the contrary, caribou with less evolutionary experience of wildfires were more likely to select recently disturbed (<5 yr-old and 6–20 yr-old) habitats. In the context that timber harvesting and its associated road network has been linked to increased mortality in boreal caribou populations, we discuss how this naïve habitat use of clearcuts can be exacerbated by historical disturbance regimes and become maladaptive for this endangered species. 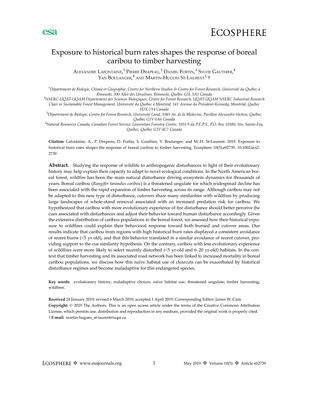