The British Columbia forest industry continuously faces challenges from commodity market volatility, increased global competition, and declining timber supply. Such challenges were front and centre during the housing and financial crisis in the United States and subsequent great recession of 2007–2009. This report presents survey results for the province’s secondary wood manufacturing industries in 2016. The survey gathered operational, employment, production, marketing, and financial information on business types, with supplemental information gathered for panelboard producers. Analysis of the survey results provides a comprehensive picture of the state of the sector’s industries and allows for comparison with past surveys conducted by the Canadian Forest Service, including the last one undertaken in 2012. The industry has grown since the last survey, but the relative economic contribution of the two largest subsectors, remanufacturing and engineered wood products, remained largely unchanged. The changes occurred among the smaller subsectors, with strong growth in shakes and shingles and other wood products offsetting the decline in millwork.

Since 1990, the Canadian Forest Service has undertaken periodic surveys of secondary wood manufacturing industries in British Columbia. Results from the latest survey, which collected data on 2016 activity, form the core of this report. In addition to presenting the structure and economic contribution of these industries to British Columbia’s economy, this report highlights trends and changes within secondary manufacturing since 1990. The sector grew tremendously during the 1990s and early-2000s but struggled during the following decade, which witnessed a severe recession, high Canadian dollar and increased foreign competition in domestic markets. In 2016, we estimate that 680 businesses employed 16,888 people and had sales of $4.46 billion. Secondary wood product industries in British Columbia are significant consumers of the province’s wood resources, utilizing an estimated 23 million cubic meters of wood fibre. Of the 5.0 million cubic meters consumed by survey respondents, 95% was sourced from within British Columbia. Many firms hope to expand operations but opportunities are threatened by several challenges. Insufficient skills and experience of labour were identified as the most pressing challenges facing the sector. 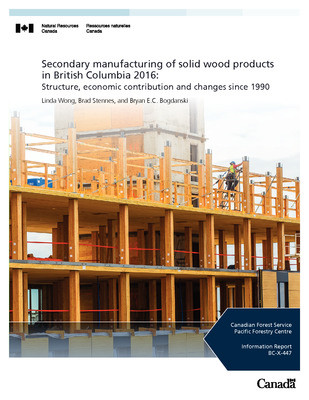