Based on data presented in 29 papers published in the Biota of Canada Special Issue of ZooKeys and data provided herein about Zygentoma, more than 44,100 described species of terrestrial arthropods (Arachnida, Myriapoda, Insecta, Entognatha) are now known from Canada. This represents more than a 34% increase in the number of described species reported 40 years ago (Danks 1979a). The most speciose groups are Diptera (9620 spp.), Hymenoptera (8757), and Coleoptera (8302). Less than 5% of the fauna has a natural Holarctic distribution and an additional 5.1% are non-native species. A conservatively estimated 27,000–42,600 additional species are expected to be eventually discovered in Canada, meaning that the total national species richness is ca. 71,100–86,700 and that currently 51–62% of the fauna is known. Of the most diverse groups, those that are least known, in terms of percent of the Canadian fauna that is documented, are Acari (31%), Thysanoptera (37%), Hymenoptera (46%), and Diptera (32–65%). All groups but Pauropoda have DNA barcodes based on Canadian material. More than 75,600 Barcode Index Numbers have been assigned to Canadian terrestrial arthropods, 63.5% of which are Diptera and Hymenoptera. Much work remains before the Canadian fauna is fully documented, and this will require decades to achieve. In particular, greater and more strategic investment in surveys and taxonomy (including DNA barcoding) is needed to adequately document the fauna. 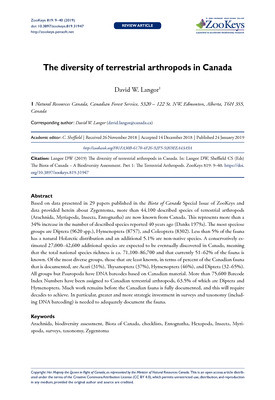