The known Lepidoptera (moths and butterflies) of the provinces and territories of Canada are summarised, and current knowledge is compared to the state of knowledge in 1979. A total of 5405 species are known to occur in Canada in 81 families, and a further 50 species have been reported but are unconfirmed. This represents an increase of 1348 species since 1979. The DNA barcodes available for Canadian Lepidoptera are also tabulated, based on a dataset of 148,314 specimens corresponding to 5842 distinct clusters. A further yet-undiscovered 1400 species of Lepidoptera are estimated to occur in Canada. The Gelechioidea are the most poorly known major lineage of Lepidoptera in Canada. Nunavut, Prince Edward Island, and British Columbia are thought to show the greatest deficit in our knowledge of Lepidoptera. The unglaciated portions of the Yukon (Beringia), and the Pacific Maritime, Montane Cordillera, and Western Interior Basin ecozones of British Columbia are also identified as hotbeds of undescribed biodiversity.

The order Lepidoptera (moths and butterflies) is the fourth-largest insect order in Canada in terms of diversity, with 5455 species identified in this country as of 2018. Butterflies are much better known than moths, but there are at least 10 times more moth species than butterfly species. This chapter in The Biota of Canada – A Biodiversity Assessment. Part 1: The Terrestrial Arthropods provides an overview of the current state of knowledge of each of the major groups of Lepidoptera that have been found in Canada. Although there are hundreds of published works on Lepidoptera in this country, much research remains to be done. Historic and modern sampling efforts for Lepidoptera have not been equal across Canada’s vast landscape. Moths and butterflies have been well studied in and near many urban centres, but they remain poorly documented in some areas, particularly in Nunavut, Prince Edward Island, and British Columbia. Small moths (micromoths) are the least well known of the Lepidoptera: more than 25% of the species of many micromoth families in North America have not yet been described. In addition, much still needs to be learned about the immature stages and host plant requirements of many Lepidoptera, particularly micromoths. 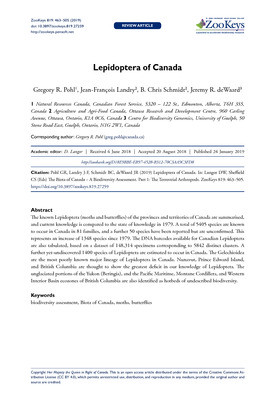