Saproxylic (i.e., deadwood-associated) insects are important functional components of biological diversity in forest ecosystems; however, they depend on microhabitats associated with dying, dead, and decaying wood that are dramatically altered by industrial forestry. Habitat loss and fragmentation by activities, such as clear-cutting, salvage logging, and bioenergy extraction, threaten saproxylic biodiversity on forested landscapes through changes in quantity, quality, and dynamics of deadwood. Retention forestry has been proposed and widely applied to support conservation and recovery of biodiversity and the associated ecological function on managed landscapes. In spite of its short history, retention forestry has undoubtedly had positive effects on biodiversity compared to conventional clear-cut harvest. The amount and pattern of retention are two important factors that determine biotic and abiotic responses and thereby influence success of retention approach. We review major findings from several large-scale variable retention experiments that have considered impacts on saproxylic insects. General conclusions from these experiments include the following three points: (1) aggregated retention conserves saproxylic insect faunas better than dispersed retention; (2) mixes of aggregated and dispersed retention have greater conservation value for saproxylic beetles than a single retention type; and (3) inclusion of prescribed burning will improve the conservation performance of retention forestry approaches. Successful conservation of saproxylic insect populations will likely depend on management to ensure availability of a full range of deadwood quantities and qualities in harvested and regenerating forest stands. We argue that variable retention harvesting, which includes sufficient amounts of retained trees as combinations of aggregated and dispersed retention, will best support diversity of deadwood habitats in the harvested matrix and promote conservation and local recovery of saproxylic assemblages

Saproxylic insects, which are insects that depend on dying, dead, and decaying wood, play an important role in forest ecosystems. They are widely thought to be more sensitive to deforestation than other organisms that live in forests, because activities such as clear-cutting and salvage logging significantly change the quantity and characteristics of deadwood in their habitats. Around the globe, variable retention harvesting is emerging as a key strategy to conduct industrial forestry in a way that both conserves the saproxylic insects in forests and meets economic objectives. This strategy involves retaining patches of trees to conserve the natural range of structures in the forest and maintain ecosystem functioning. This chapter in Saproxylic Insects discusses the pros and cons of various approaches to retention. In several large-scale experiments around the world, researchers are testing how well variable retention harvesting conserves biodiversity. Four of these (in Alberta, Canada; Oregon and Washington, United States; Tasmania, Australia; and eastern Finland) are highlighted in this chapter. The authors conclude the chapter by suggesting nine areas for future work, such as the publication of up-to-date information on saproxylic organisms that live in regions significantly affected by forestry. 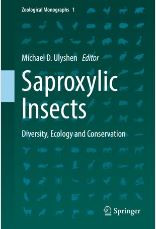