The Alberta Oil Sands Environmental Research Program (AOSERP), established in 1975, funded the creation of a soils inventory of the mineable Alberta oil sands, which was published as a set of eight soil map sheets with an accompanying report in 1982. These formed arguably the most comprehensive soils data set ever collected in the region and are of considerable value for environmental studies and reclamation efforts. This report describes the creation of a digital product containing these data, which was derived directly from the 1982 AOSERP map sheets and report and is freely available as a set of shapefiles and accompanying attribute databases for geographic information systems. The product includes a colored map showing soils classified by soil group, a coverage of soil polygons classified by dominant soil unit, soil unit characteristics derived from multiple tables, and a point coverage of soil-profile descriptions, with physical data, for specific locations in the study region.

This report describes a new digital product that will be valuable for environmental studies and land reclamation and restoration projects in the Alberta oil sands. The product consists of digital geographic information systems (GIS) files, taken from detailed maps and tables compiled in the late 1970s and published in 1982. This major effort, conducted by the Alberta Oil Sands Environmental Research Project (AOSERP), produced eight paper-based maps and a comprehensive report. However, these were not well used because they were published just before the computer era, when scientists turn more and more to digital information. This newly created digital version identifies soils across 3.3 million hectares, subdividing soils found on this landscape into soil groups and soil units. These are shown in different colors on the detailed maps, which link to tables of soil attributes. This report explains how the maps were digitized and provides metadata describing the data about the soils captured in the files. The authors believe that these carefully reconstructed digital maps and datasets will help in future studies and restoration plans. 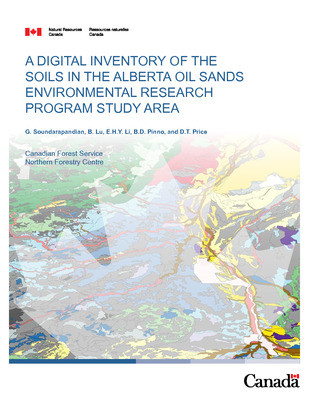