There has been a recent increase in new records of insects from the subtropical parts of South Africa that have expanded their historic ranges to now include the biologically and climatically atypical south-western Cape region at the tip of the African continent. Suggested mechanisms include climate change, provision of previously absent nutriments and direct transport of individuals via human activities. Here we summarize previous reports of fruit chafer beetles (Coleoptera, Scarabaeidae, Cetoniinae, Cetoniini) invading the south-western Cape region, provide additional data on their distributions and provide data for additional taxa that have now also been newly recorded in the region. The newly reported species Pachnoda sinuata sinuata probably naturally occurs in the region but has gone unnoticed due to specialized habitat requirements and morphological similarity to a widespread generalist. Some taxa are very recent arrivals while others have been known from the region for a long time, but all are experiencing noticeable population increases in urban and agricultural areas. We propose that these species likely dispersed from their native ranges to the south-western Cape via direct transport of colonised nursery stock and their recent increases in population size are consistent with what is expected when founder populations overcome barriers to reproduction. All of the new arrivals are well-adapted to transformed landscapes in the subtropics and do not occupy natural vegetation in the newly invaded ranges, strengthening the hypothesis that pre-adaptation to human settlements aid biological invasions of otherwise unsuitable bioregions in South Africa. As many additional species are pre-adapted to transformed biotopes in subtropical areas, one would expect that additional species will colonise the south-western Cape in the future with unknown economic, ecological and evolutionary consequences. 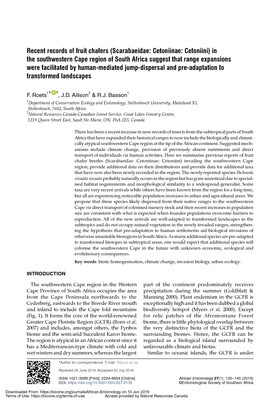