Population density is often a critical factor in colonisation of trees by bark and wood-boring insects and may determine whether an exotic species is likely to establish and spread. In a manipulative field study, we investigated whether density of the attacking population of an exotic invasive woodwasp, Sirex noctilio Fabricius (Hymenoptera: Siricidae), affected survival and time-to-death of a favoured host tree, Pinus sylvestris Linnaeus (Pinaceae). We introduced mating pairs of woodwasps to stressed P. sylvestris at either high (15 mating pairs, nine trees) or low (two mating pairs, nine trees) density. More trees died, and more quickly, when exposed to the high versus low density of S. noctilio (78% versus 33% of trees). In the high-density treatment, year of tree death was synonymous with production of a S. noctilio F1 cohort (one-year or two-year generation time); this pattern was not as consistent in the low-density treatment. Although sample size was limited, our results indicate that attack density affects S. noctiliocolonisation of P. sylvestris. 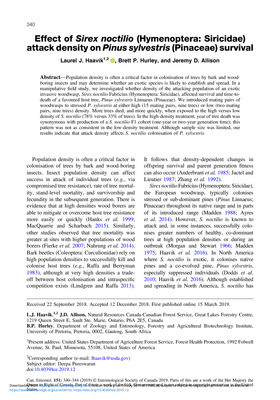