Butternut (Juglans cinerea) has been considered endangered in Canada since 2005; its precarious status is primarily due to a canker caused by Ophiognomonia clavigignenti-juglandacearum. This disease, apparently introduced into North America, was first reported in Wisconsin in 1967. The first record in Canada was from the province of Québec in 1990. The main symptoms are crown dieback and, very often, cankers on the trunk that almost always end up killing trees of all ages. This review describes some of the work that we have done to provide a better understanding of the disease. Particular emphasis is placed on our research to identify, propagate and test specimens that were putatively resistant to canker, as well as the assays conducted to improve their vigour through release treatments. For example, we were able to show that following artificial inoculation under greenhouse conditions, certain butternut trees displayed some resistance to canker, and that they defended themselves through compartmentalization of the tissues invaded by the pathogen. These potentially resistant individuals offer a unique source of material to restore the species to certain sites. 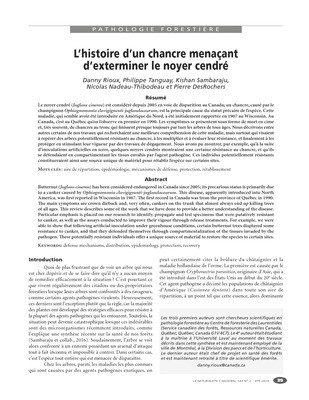