Survival and vigor of off-site and exotic plantations near Terrace and Campbell River, British Columbia

Although hundreds of off-site and exotic tree plantations have been established in British Columbia since the 1950s, there is a lack of current information on their survival and condition. In this report, we document the work undertaken to locate some of these plantations and assess their success. Sites selected were planted between 1958 and 1982 in the areas near Terrace and Campbell River. Fieldwork procedures followed Canada’s National Forest Inventory (NFI) ground-sampling guidelines. The Table Interpolation Program for Stand Yield (TIPSY) was used to compare the growth and stocking of the off-site species with projected growth of local species and with their projected growth in their native habitat. Of 22 potential sites for the Terrace region, NFI plots were established in 7, limited assessments were done in 5, and 10 were either not found or inaccessible. Based on site index and radial growth, all species in our NFI plots exhibited greater diameter and height growth compared to the native species present and those modeled with TIPSY. Contribution to total basal area (BA) by off-site/exotic species ranged from 25% to over 90%. We visited five sites in the Campbell River area and established NFI plots in all of them. Although the off-site/exotic species comprised the bulk of the contributing BA on all sites, the leading native species, Douglas-fir (Pseudotsuga menziesii (Mirb.) Franco var. menziesii), had larger diameters and heights than the pine species, whereas the native western hemlock (Tsuga heterophylla (Raf.) Sarg.) also showed greater radial growth than the larch species. These initial findings suggest that further investigation of successful off-site and exotic plantations may provide useful information for reforestation and assisted migration while an investigation of wood quality and unique attributes of successful exotic plantation tree species may also reveal opportunities to expand and diversify British Columbia’s wood fibre basket. 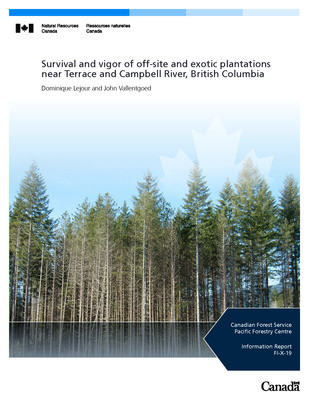