Since 2000 mountain pine beetle (MPB) has spread relatively rapidly east across the Rocky Mountains, through northeastern British Columbia and across much of the province of Alberta as well as northwards. The risk of further northward spread in the near future is low due to poor climatic suitability and the subsiding of large populations in northern British Columbia. Currently the greatest threat of eastward spread comes from populations east and south of Slave Lake, which are persisting and slowly spreading in susceptible stands. Large populations in western Alberta could perceivably contribute to eastward spread in the near future. This risk assessment found more pine at risk across Alberta, Saskatchewan, Manitoba and Ontario using collated provincial inventory data compared to national data sources used in previous assessments. Overall, there is a low probability of spread via the human-assisted pathway due to the low volume of wood moved and provincial policies, although speciality users could pose a higher risk. New preliminary evidence indicates that control efforts in Alberta have significantly reduced the area impacted by MPB compared to a “do nothing” strategy. A major outstanding research need remains an analysis of socio-economic consequences and ecological services values that are at risk in Canada.

Also available under the title:
Risk assessment of the threat of mountain pine beetle to Canada’s boreal and eastern pine forests. (English) 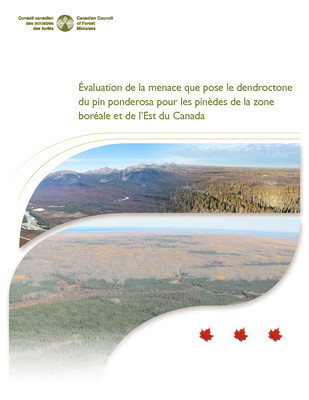