The objective of this study was to demonstrate an modelling approach to account for climate change effects on productivity forecasts of black spruce and jack pine plantations at the stand-level by density management regime, emission scenario and commitment period, site quality and geographic location, via the modification of existing structural stand density management models. Analytically, climatic parameters as predicted by a global climate model in association with a regional spatial climatic model for 3 commitment periods at each of 3 geographic locations in central Canada under 3 plausible emissions scenarios, were used as input values to biophysical-based site-specific height-age functions. The resultant functions when integrated within the models enabled the estimation of climate change effects on a broad array of stand-level productivity measures. Analyzing the simulated responses of these commercial-important species across a broad range of geographic locations and commitment periods, provided a more complete assessment of the potential range of climate change effects than have previous mensurational-based attempts. Empirically, the simulation results suggested that the predicted warmer and wetter growing seasons arising from increases in the emission of greenhouse gases and aerosols will negatively affect the productivity of black spruce in north-eastern (poor-to-medium site qualities) and north-western Ontario and jack pine irrespective of locale or site quality, over the next 75 years. Employment of an adaptive evaluation procedure consisting of annual field assessments of predicted climatic change effects in association with an iterative modelling approach as developed in this study is a plausible future research pathway for tracking effects and improving projections. 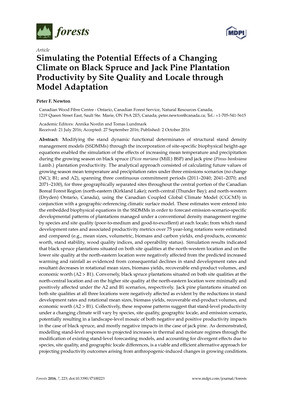