Satellite-derived spectral indices such as the relativized burn ratio (RBR) allow fire severity maps to be produced in a relatively straightforward manner across multiple fires and broad spatial extents. These indices often have strong relationships with field-based measurements of fire severity, thereby justifying their widespread use in management and science. However, satellite-derived spectral indices have been criticized because their non-standardized units render them difficult to interpret relative to on-the-ground fire effects. In this study, we built a Random Forest model describing a field-based measure of fire severity, the composite burn index (CBI), as a function of multiple spectral indices, a variable representing spatial variability in climate, and latitude. CBI data primarily representing forested vegetation from 263 fires (8075 plots) across the United States and Canada were used to build the model. Overall, the model performed well, with a cross-validated R2 of 0.72, though there was spatial variability in model performance. The model we produced allows for the direct mapping of CBI, which is more interpretable compared to spectral indices. Moreover, because the model and all spectral explanatory variables were produced in Google Earth Engine, predicting and mapping of CBI can realistically be undertaken on hundreds to thousands of fires. We provide all necessary code to execute the model and produce maps of CBI in Earth Engine. This study and its products will be extremely useful to managers and scientists in North America who wish to map fire effects over large landscapes or regions

Researchers across the globe are using satellite imagery to produce maps that describe the severity of fires in forested landscapes. To date, however, it has been difficult to link these maps with on-the-ground fire effects. To address this problem, the authors of this study set out to produce maps that would interpret satellite imagery in terms of a widely used field-based measure of fire severity, the composite burn index (CBI). To calculate the CBI, observers visit a location that has been burned, usually one year after the fire, and rate the condition of different types of plants and the condition of materials on the forest floor. The authors acquired CBI data for 263 fires in North America that primarily burned forest vegetation. Using Google Earth Engine, a cloud-based satellite image catalog and computing environment, the authors then built and evaluated a model to model and map CBI. They have distributed the code they used in this study so that other scientists and forestry professionals will be able to map fire effects over hundreds to thousands of fire using Google Earth Engine. 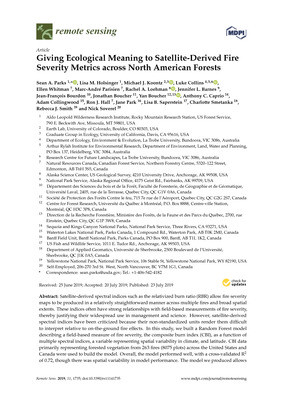