Peatlands in the northern boreal forest often contain large expanses of permafrost terrain, where permanently frozen ice-cored mounds form and trees grow in otherwise wet areas. The presence of trees on permafrost wetlands increases wildfire risk; severe wildfire can lead to the thaw of the ice-cored mounds, returning the ecosystem to a wetter state and releasing methane, an important greenhouse gas, into the atmosphere from the previously frozen soil at a dramatic rate. Thawing of permafrost mounds is expected to increase in response to climate change, but it is not known how much wildfire will accelerate this process. In this study we examined several permafrost peatlands in northern Alberta and the southern Northwest Territories that had last burned between 2 and 49 years earlier. Fire had an affect on the amount of thawing and permafrost for as long as 30 years afterwards, at which point thaw rates in burned areas were equal to those in non-burned areas. We estimate that wildfire is directly responsible for 25% of all permafrost thaw in the region, accounting for about 2200 km2 of thawed area, or slightly less than half the area of Prince Edward Island. Our findings can be used to predict future carbon emissions from the boreal forest. 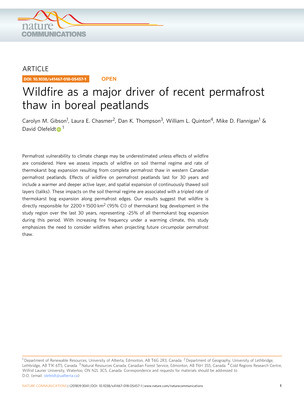