Concern over the amount of soil disturbance associated with clearcut logging on steep slopes in the Nelson Forest District led, in 1973, to the formulation of general Forest Service regulations governing ground skidding operations. This was followed by the formation of the multi-agency Steep Slope Committee, which had as one of its objectives a description of the extent and severity of soil disturbance over a range of sites and logging methods. To this end, data were collected in the summers of 1974 and 1975 from 9,361 mil-acre plot and point samples along 78 transects distributed widely throughout the Nelson Forest District to describe soil and vegetative conditions on steep-slope clearcuts. The most soil disturbance was caused by ground skidding operations on bare ground (average 45% of the clearcut area) and the least by skyline logging. Ground skidding on snow and high-lead cable systems reduced soil disturbance by about one-half compared with summer ground skidding. Soil disturbance on ground between haul roads and skidroads was much less extensive than that related to roads but was increased by two to four times by broadcast slash burning. Vegetative cover increased steadily with time following logging on both burned and unburned surfaces between roads, but was higher after 11 years on the latter as a result of a greater initial cover of residual vegetation. Excluding planting, areas between roads in unburned clearcuts and road surfaces in both burned and unburned clearcuts were satisfactorily restocked with new and advance regeneration after about 9 years. Surfaces between roads in burned clearcuts were not satisfactorily restocked up to 10.5 years, the average age of the oldest burned clearcuts examined. Differences in vegetative cover and stocking of regeneration were noted among biogeoclimatic zones. Examples of soil erosion were recorded and described. Recommendations for further surveys and research are made. 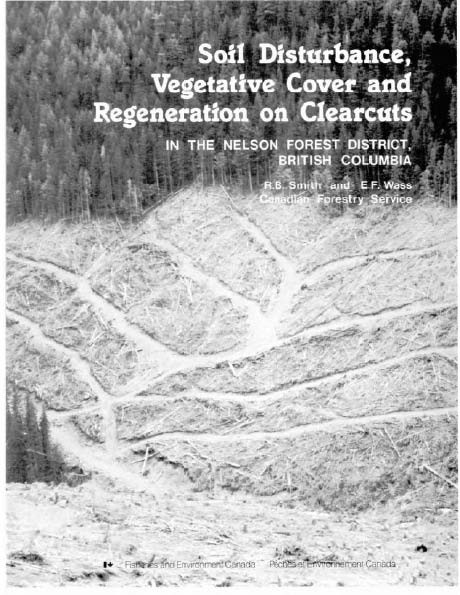