Background: Olfaction and gustation underlie behaviors that are crucial for insect fitness, such as host and mate selection. The detection of semiochemicals is mediated via proteins from large and rapidly evolving chemosensory gene families; however, the links between a species’ ecology and the diversification of these genes remain poorly understood. Hence, we annotated the chemosensory genes from genomes of select wood-boring coleopterans, and compared the gene repertoires from stenophagous species with those from polyphagous species.

Results: We annotated 86 odorant receptors (ORs), 60 gustatory receptors (GRs), 57 ionotropic receptors (IRs), 4 sensory neuron membrane proteins (SNMPs), 36 odorant binding proteins (OBPs), and 11 chemosensory proteins (CSPs) in the mountain pine beetle (Dendroctonus ponderosae), and 47 ORs, 30 GRs, 31 IRs, 4 SNMPs, 12 OBPs, and 14 CSPs in the emerald ash borer (Agrilus planipennis). Four SNMPs and 17 CSPs were annotated in the polyphagous wood-borer Anoplophora glabripennis. The gene repertoires in the stenophagous D. ponderosae and A. planipennis are reduced compared with those in the polyphagous A. glabripennis and T. castaneum, which is largely manifested through small gene lineage expansions and entire lineage losses. Alternative splicing of GR genes was limited in D. ponderosae and apparently absent in A. planipennis, which also seems to have lost one carbon dioxide receptor (GR1). A. planipennis has two SNMPs, which are related to SNMP3 in T. castaneum. D. ponderosae has two alternatively spliced OBP genes, a novel OBP “tetramer”, and as many as eleven IR75 members. Simple orthology was generally rare in beetles; however, we found one clade with orthologues of putative bitter-taste GRs (named the “GR215 clade”), and conservation of IR60a from Drosophila melanogaster.

Conclusions: Our genome annotations represent important quantitative and qualitative improvements of the original datasets derived from transcriptomes of D. ponderosae and A. planipennis, facilitating evolutionary analysis of chemosensory genes in the Coleoptera where only a few genomes were previously annotated. Our analysis suggests a correlation between chemosensory gene content and host specificity in beetles. Future studies should include additional species to consolidate this correlation, and functionally characterize identified proteins as an important step towards improved control of these pests. 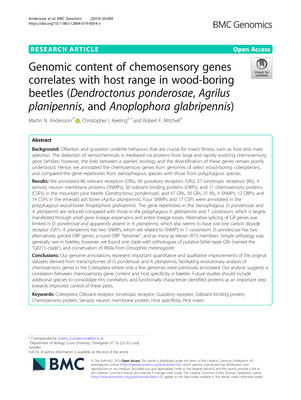