Aerial applications of a registered formulation of synthetic spruce budworm female sex pheromone were made in 2008, 2013 and 2014 to disrupt mating in populations of this forest insect pest in Quebec, Canada. Each year, the applications resulted in a 90% reduction in captures of male spruce budworm moths in pheromone-baited traps. A commensurate reduction in mating success among virgin females held in individual cages at mid-crown of host trees was also obtained. However, there was no reduction in the populations of eggs or overwintering larvae in the following generation (late summer and fall). The failure of this approach as a viable tactic for spruce budworm population reduction could have resulted from considerable immigration of mated females, as evidenced by high rates of immigration and emigration that caused steep negative relationships between apparent fecundity and the density of locally emerged adults. 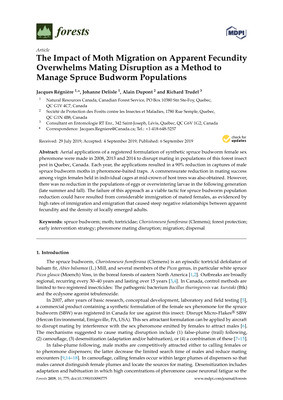