In contrast to marked climate change across glacial-interglacial cycles, the Holocene epoch represents a relatively warm, stable interval. However, on ﬁner temporal scales, it too has experienced both gradual and rapid changes in climate. In the North Atlantic region, many rapid climate changes (RCCs) coincide with ice-rafted debris (IRD) or Bond events, which are associated with cooling and suggested to occur with periodicities of 1370 ± 500 years. Given that climate is a dominant control of ﬁre activity, regulating both vegetation productivity and fuel moisture, this study investigated the linkage between Holocene ﬁre, IRD episodes and associated RCCs in seven high-resolution charcoal records distributed across Europe. Results show low-frequency ﬁre periodicities of 500–600 years, 900–1400 and 2400 years that occurred simultaneously across northern and mid-latitude Europe, suggesting that regional ﬁre disturbance responded to large-scale climate drivers. The
900–1400 year periodicity is most common among sites and of similar frequency to IRD episodes, potentially reﬂecting a connection between mechanisms regulating IRD ﬂux in the North Atlantic and wildﬁre activity in Europe. Although the data indicate some spatial variability in ﬁre induced by local drivers (such as vegetation and human impact) during RCC events associated with IRD peaks, broad-scale patterns are discernible. Speciﬁcally, Northern Europe burned more during the 10.2, 9.4, 8.2, 5.9 and 4.2 kiloannum before present (ka) RCC events when climate was drier, and less during the 2.9 and 1.4 ka events when climate was moister. In contrast, in mid-latitude Europe, a higher incidence of ﬁre is documented at 8.2 and 1.4 ka when climate was drier and a lower incidence of ﬁre is associated with moister conditions at 10.2, 9.4 and 2.9 ka. Spatial heterogeneity is evident in mid-latitude Europe during the 5.9, 4.2 and 0.4 ka events. These spatially explicit sub-continental scale differences in ﬁre activity may be related to differences in moisture availability resulting from shifts in associated atmospheric circulation patterns. 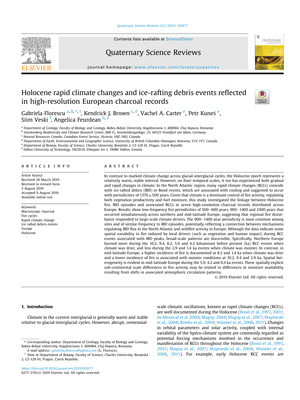