Currently, there is no consensus regarding the way that changes in climate will affect boreal forest growth, where warming is occurring faster than in other biomes. Some studies suggest negative effects due to drought‐induced stresses, while others provide evidence of increased growth rates due to a longer growing season. Studies focusing on the effects of environmental conditions on growth–climate relationships are usually limited to small sampling areas that do not encompass the full range of environmental conditions; therefore, they only provide a limited understanding of the processes at play. Here, we studied how environmental conditions and ontogeny modulated growth trends and growth–climate relationships of black spruce (Picea mariana) and jack pine (Pinus banksiana) using an extensive dataset from a forest inventory network. We quantified the long‐term growth trends at the stand scale, based on analysis of the absolutely dated ring‐width measurements of 2,266 trees. We assessed the relationship between annual growth rates and seasonal climate variables and evaluated the effects of various explanatory variables on long‐term growth trends and growth–climate relationships. Both growth trends and growth–climate relationships were species‐specific and spatially heterogeneous. While the growth of jack pine barely increased during the study period, we observed a growth decline for black spruce which was more pronounced for older stands. This decline was likely due to a negative balance between direct growth gains induced by improved photosynthesis during hotter‐than‐average growing conditions in early summers and the loss of growth occurring the following year due to the indirect effects of late‐summer heat waves on accumulation of carbon reserves. For stands at the high end of our elevational gradient, frost damage during milder‐than‐average springs could act as an additional growth stressor. Competition and soil conditions also modified climate sensitivity, which suggests that effects of climate change will be highly heterogeneous across the boreal biome. 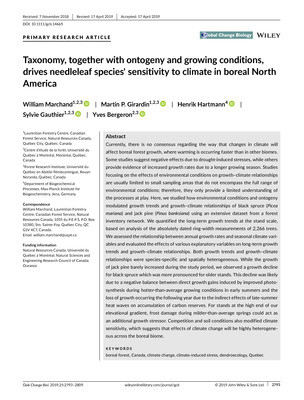