We used components of the British Columbia Ministry of Forests, Lands, Natural Resource Operations and Rural Development’s suite of decision support tools, SYLVER (which facilitates evaluation of the effects of Silviculture on Yield, Lumber Value and Economic Return), to model and compare predicted merchantable wood volume and financial outcomes of stands that developed following various site preparation or vegetation control treatments applied at experimental sites in north-central British Columbia. We used data collected over a 25-year period on lodgepole pine at the Bednesti and Stony Lake sites (Sub-boreal Spruce biogeoclimatic zone) and on white spruce at the Inga Lake site (Boreal White and Black Spruce biogeoclimatic zone) to model predicted future growth and yield using the TASS (Tree And Stand Simulator) model, and used the FAN$IER (Financial ANalysis of Silviculture Investment and Economic Return) modelling software to compare predicted financial outcomes. The magnitude and timing of maximum net present value (NPV), site value (SV), and internal rate of return (IRR) financial metrics were interpreted in comparison with the age at which predicted maximum mean annual increment (MAI), and an operational merchantable volume target of 250 m3/ha, were projected to be attained.

In the lodgepole pine stands, best-case outcomes defined by maximum NPV, SV, and IRR were consistently predicted to occur between ages 35 and 55 years, which was earlier than the age at which maximum MAI was predicted. On average, across all treatments at the Bednesti and Stony Lake sites, maximum NPV, SV, and IRR were predicted in pine stands at ages 49, 46, and 38 years, respectively. At the Bednesti site, the shear and pile control treatment selected to approximate post-harvest conditions (and assumed to have no cost for this exercise) outperformed all other treatments. The commonly applied disc trenching treatment had only 87% as many trees as in the shear and pile control treatment at age 25, which likely contributed to the lower volume increase projected in the former. At the Stony Lake site, maximum NPV was predicted to be approximately equal in the most costly treatment (a combination of disc trenching and follow-up brushing that produced the best growth) and in the no-cost treatment (shear and pile).

In the white spruce stands, maximum NPV, SV, and IRR were predicted to occur between ages 40 and 70 years, which again was earlier than the age projected for maximum MAI. Across all treatments at the Inga Lake site, NPV and SV maxima were projected at age 58 years and maximum IRR was projected at age 45. A herbicide-based vegetation control treatment (with follow-up manual brushing) applied at the Inga Lake site consistently showed the highest predicted financial returns from white spruce because volume development at that site was highly dependent on the extent to which treatments controlled overtopping vegetation. The plow inverting and vegetation control treatments were approximately equally successful and showed very good predicted volumetric and financial outcomes. Disc trenching did not effectively control vegetation at this site, and resulted in very low volumetric and financial returns that were only marginally higher than those predicted in the shear and pile control treatment. The FAN$IER model provides a means of evaluating the effects of harvesting at different ages on financial outcomes. Our projections for lodgepole pine suggest that NPV, SV, and IRR are maximized no later than age 50, and before the stands have attained 95% MAI culmination age, which is the current criterion used for timber supply planning in the Prince George TSA of central British Columbia. For both pine and spruce, the model runs indicated that NPV can increase or decrease steeply during individual 5-year periods between stand ages 40–65 years, which highlights the importance of careful determination of harvest age. Decisions regarding harvest age are based on many factors besides maximizing financial returns, however; under current model parameters, adhering strictly to that single objective would result in more frequent harvesting of young stands, which could potentially negatively impact other forest values, as well as reduce the landscape-level structural diversity of our forests and limit our ability to respond to future market changes. 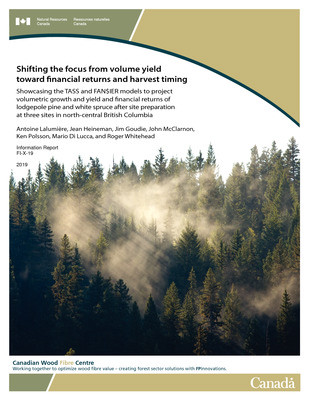