The 2017 fire season was one of the largest on record for British Columbia (BC), Canada, in terms of total area burned (estimated 1.2 million ha), affecting the safety and air quality of numerous communities. Moreover, fires of this number and extent alter the wood supply for harvesting, the nature of habitat for wildlife, and can affect regional and national carbon budgets. As a result, it is important to map these fires accurately and to monitor within-year fire progression in order to quantify the resulting forest-disturbance impacts fully. The Bayesian Updating of Land Cover (BULC) algorithm was used to merge burned-area classifications of individual fires from a range of remote sensing sources such as Landsat-7, Landsat-8, Sentinel-2, and MODIS (MCD64A1) burned-area dataset. Together, these provisional classifications imaged each pixel within a known fire perimeter an average of 33.8 times between April 1 and December 1. The resulting 35-week time-series stack had updated weekly burned areas for each of the 89 fires in BC in 2017. Province-wide fire progression was variable throughout the period analyzed, characterized by a steady burn phase of 41,437 ha (5% of total area burned) over a two-week period in early July, an accelerated burn phase of 149,422 ha (17%) from mid-July to early August, another steady burn phase of 218,079 ha (24%) for one month until early September, and a second accelerated burn phase of 301,931 ha (34%) over two weeks in late September with subsequent steady growth of 180,119 ha (20%) over 1.5 months until containment in late October. Herein, we demonstrate how such temporally dense fire classification stacks can be used to analyze fire progression over the course of a fire season (both retrospectively and in near-real time) providing useful metrics to characterize and compare fire events. End-of-season burned-area estimates correspond with estimates derived from the National Burned Area Composite (NBAC) product that is generated retrospectively from fire best-available mapping approaches. This rapid interpretation of information enables the analysis of suppression success and potential drivers of fires spread while facilitating analyses of carbon budget consequences as well as impacts to communities and timber supply.

As freely available remotely sensed data sources proliferate, the ability to combine imagery with high spatial and temporal resolutions enables applications aimed at near-term disturbance detection. We used the Bayesian Updating of Land Cover (BULC) algorithm to merge burned-area classifications from a range of remote-sensing sources such as Landsat-7, Landsat-8, Sentinel-2 and MODIS. The highly automated methods presented herein can synthesize multi-source fire classifications for active phase monitoring both retrospectively and in near-real time. This study reveals the potential for classifying multi-source, ﬁre-progression stacks in other fire-prone regions and fire seasons utilizing our approach. 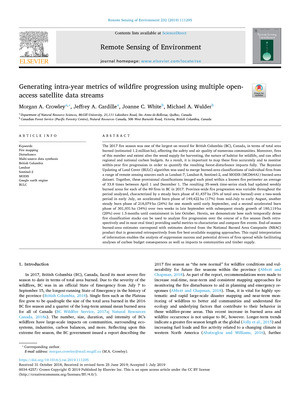