The necrocolous Coleoptera (attracted to carrion) are important to maintain balance in insect communities and in the recycling of soil nutrients; however, there is scarce data on the species that occur in Agave tequilana Weber (Asparagaceae) fields. The diversity patterns of beetles (Coleoptera: Scarabaeidae, Silphidae, and Trogidae) dwelling in 2–4-year-old A. tequilana plots were established by sampling specimens from May to November 2016. In total, 5509 individuals of 23 species were collected. The highest species diversity was found in Magdalena Municipality, followed by the Arandas and Tequila municipalities (Jalisco, Mexico), with significant differences in abundance among municipalities and crop age. The variability in Magdalena and Tequila assemblages was associated with the temperature, while in Arandas it was attributed to the precipitation. The beetle species diversity, species replacement, and dominance in different municipalities are the result of changes in habitat, the interaction of environmental variables, distribution affinities of species, and agronomic practices in A. tequilana fields. 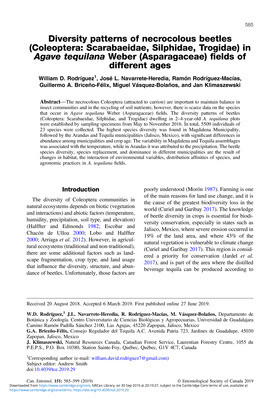