Heterobasidion annosum sensu lato is a species complex of pathogenic white-rot wood decay fungi which cause root and butt rot in conifer and hardwood species across the Northern hemisphere. Annual losses to forest managers are valued in the billions of dollars, due to tree mortality, reduction in timber yield, and wood decay. In North America, H. irregulare and H. occidentale have a partially overlapping host and geographic range, cause similar disease symptoms and produce similar fruiting bodies, making discrimination between the two of them often difficult. We developed two sets of primers that bind specifically to conserved, but species-specific portions of glyceraldehyde 3-phosphate dehydrogenase and elongation factor 1α alleles. The method is sensitive enough to detect either species from infected wood. Analysis of North American isolates has further clarified the distribution of both species on this continent, including the detection of H. irregulare for the first time on ponderosa pine (Pinus ponderosa) and eastern white pine (Pinus strobus) in British Columbia. This method has the potential to be a valuable tool for the detection of the pathogen in exported/imported wood products, as well as for the further identification and assessment of the distribution of North American Heterobasidion species.

Heterobasidion species complex has significant impact on Canada’s managed forests and a major concern to CFIA, Provincial Agencies and Forest Industry. The former H. annosum sensu lato is a complex species with H. irregulare & H. occidentale occurring in North America, while H. annosum sensu stricto, H. parviporum, & H. abietinum occurring in Eurasia. The CFIA has identified Heterobasidion as a forest pathogen of significant regulatory concern. The risks associated with introduction of new strains of H. irregulare into western Canadian forests & hybridization with H. occidentale; and risk of exporting the North America’s spp. to Canada’s trade partners via wood products & non-timber products (e.g., Salal foliage) are high. Eurasian Heterobasidion spp. could potentially be imported into Canada. The objectives of the study are development of set of PCR-DNA primers that can be used for detection, identification and differentiation of the North American Heterobasidion spp. The assay descried in this study is cost-effective, fast and reliable method for differentiating between the two North American Heterobasidion spp. and led to discovery of H. irregualre for the first time in BC forests. We developed two taxon-specific DNA- PCR primers based on two genes: Glyceraldehyde 3-phosphate dehydrogenase & Elongation 1α alleles. The method is sensitive enough to detect either species from infected wood. The results generated from this study addresses the end users’ needs for disease management and for the timely detection, accurate identification, cost-effective surveillance, & development of effective phytosanitary recommendations for certification of wood products for international trade. 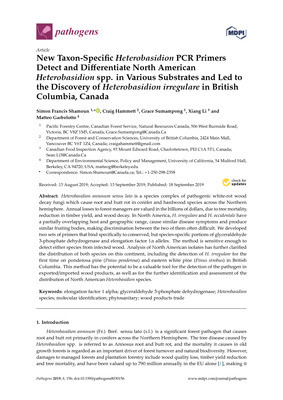