The spruce budworm (SBW), the most significant insect pest affecting coniferous stands in North America, is present in every province of Canada. In Quebec, the country’s most afflicted province, it feeds mainly on the young needles of balsam fir and white spruce. Although the SBW plays an important ecological role, it causes heavy losses. With the current epidemic which began in 2006, Quebec’s infested forests reached a new level in 2018, covering 8.1 million hectares.

For years, researchers have been closely following the SBW’s natural enemies (a). Monitoring them will help researchers assess their impact on SBW population densities and learn what role they play in triggering, expanding, then abating these epidemics. In order to facilitate monitoring, Canadian Forest Service scientists are working on the development of a faster and more reliable method based on the creation of a simple and innovative molecular tool capable of «recognizing» the SBW’s natural enemies by means of their DNA. 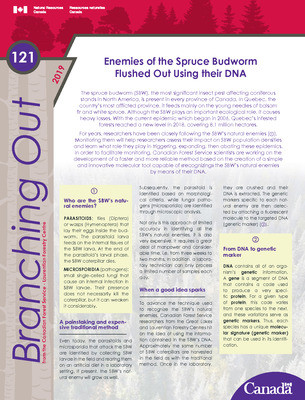