The boreal mixedwood forest ecosystem includes both coniferous and deciduous tree species and is a common and widespread ecosystem in the Canadian boreal forest resulting from harvesting, forest fires and insect infestations, e.g., spruce budworm. The trees most commonly found in boreal mixedwood stands are trembling aspen, white birch, white and black spruce and balsam fir. An investigation into the carbon stocks present in boreal mixedwood forest, and the rate of carbon accumulation in that forest type showed that, compared to other boreal forest types, the carbon stocks were typically higher as was the rate of carbon absorption. Carbon accumulation was fastest in a middle-aged forest, and much of the stored carbon was in the soil and forest floor detritus. Measurements from the present study, together with those from other Canadian boreal forest ecosystems, may be employed in decision making with regard to management practices followed in Canada’s boreal forest, e.g., in relation to restocking and timing of harvesting to optimise carbon sequestration and climate change mitigation. Interestingly, boreal mixedwood forest has other desirable characteristics; for logging, the variety of available species is often a commercial advantage over other stand types, also forest fires are less frequent and easier to fight in this stand type as they spread more slowly. In addition, the plant diversity is also a benefit through the range of ecological services they can provide, as compared to monocultures. 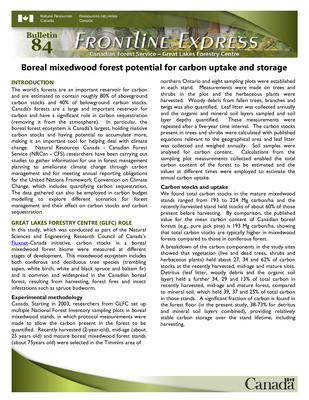