The Green River precommercial thinning (PCT) trial was established between 1959–1961 in New Brunswick (Canada) within natural balsam fir (Abies balsamea (L.) Mill.)-dominated stands. Three silviculture scenarios differing only by the increasing nominal spacings of PCT treatments (1.2 m, 1.8 m, 2.4 m) were compared to an unthinned control within randomized replicates that were clearcut harvested in 2008 and treated with herbicide in 2011. During the fourth post-harvest growing season, we assessed regeneration, competing vegetation and coarse woody debris (CWD; differentiated between large woody debris and slash) to assess the legacy effects of PCT on regeneration of next rotation stands. Our results confirmed that silviculture scenarios including PCT significantly increased conifer stocking in treated plots compared to control conditions, but only in the 1.8 m nominal spacing. Considering that treated and untreated stands were fully stocked, we conclude that PCT using the spacing gradient tested has no legacy effect on the regeneration of next rotation natural balsam fir stands. Given the known sensitivity of balsam fir to future climate conditions in this region, we suggest that future treatments should promote tree species diversity to support ecosystem resilience to climate change by favouring more warm-adapted species, such as some hardwoods. 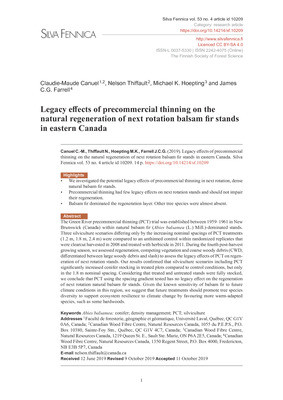